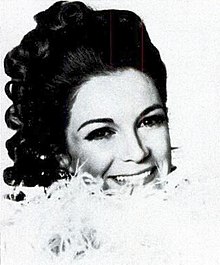 From an article written in 1982 I read that the next singer was the biggest selling female singer of all time. If one looked between 1958-1963 she was hardly missing from the charts. Yet, her music was low-key, often ballads, or teen movie type songs.

dressed one on every level. As a teenager, her image was that of a mature woman and

she acted like one, whilst her songs were versatile. In 1959 ‘Lipstick on Your Collar’ and ‘Frankie’ were in the charts for the teen population ‘God Bless America’ and ‘Among My Souvenirs’ aimed at their parents.

Born Concetta Franconero in 1938 of Italian heritage, the young girl began her career

by playing the piano accordion firstly at school, then appearing on a TV talent show

called Star-time. With exposure George Scheck became her manager, and like Pat Boone, Concetta appeared also on the Arthur Godfrey Talent show. By 17 with a

At 19 Francis took the role of a young singer in the movie Jamboree, with MGM

the UK placing it at No 1 and some saying this set the standard of her musical mpath.

followed. The last a duet with Marvin Rainwater.

Boys’ in 1962 were hits for Francis. These had followed ballads ‘Don’t Break the

Heart that Loves You’ and ‘My Heart has A Mind of its Own’.

on the wall with MGM steering Connie into the world of Light Entertainment, Latin

Its hard to see the relevance of Connie Francis in the Rock era, however, popularity

and the such are measured by chart success.