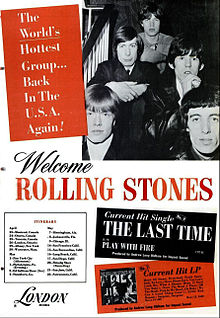 It was the year that some of rock’s illustrious stars hit the headlines and charts for the first time. In January, DJ and Rock’n’Roll pioneer Alan Freed died aged only 43. Georgie Fame’s ‘Yeh Yeh’ replaces the Beatles at the top of the UK charts. By December the Beatles are on top of the British charts with a double header ‘Day Tripper/’We Can Work it Out’.

A year with outspoken thoughts, ideas and actions some of which should not be repeated. Journalists were not afraid to describe events bluntly such as ‘Mississippi John Hurt, a black singer, playing to a white folk audience, in Greenwich Village.

Diverse groups of artists such as Sammy Davis Jnr. Bobby Darin, Tony Bennett, travel to Alabama to put on a concert in aid of civil rights, whilst Bob Dylan and Joan Baez take part in a Vietnam protest march. January saw the Animals play the Apollo theatre. The first ‘white’ band in years! !

Herman’s Hermits from the UK invades the US on a 34 day event with the Zombies. Liittle Anthony, the Shangri-Las, Bobby Vee.

May: ‘Help me Rhonda’ from the Beach Boys No 1 in the US.

June: The Bryds with Mr.Tambourine Man reaches No 1 with the Hollies having their only No 1 with ‘I’m Alive’. It’s the year Shea Stadium New York hosts 60,000 fans to a Beatles performance and the same month ‘Help’ hits the top of the UK charts. A time of unruly fans as they drag Mike Smith of the Dave Clark Five from the stage and also break through barriers of a Manchester TV studio, waiting for the Stones.

The Supremes release their 3rd number 1 of the year. ‘I Hear a Symphony’. Jonathan King appears on the Ed Sullivan Show, with his hit number ‘Everyone’s Gone to the Moon’ which addressed the current vogue of what King described as the overuse of meaningful lyrics. It probably included Barry McGuire and one of the biggest One hit wonders ‘Eve of Destruction’.

Footnote: Quote of the Year

The most successful record in the US in 1965 was the Rolling Stones ‘I Can’t Get No Satisfaction’.

Peter Hamill of the New York Post describes his impression of the Rolling Stones.

‘They sit before you at a Press Conference like five unfolding switch blades, their faces set into rehearsed snarls, their hair studiously unkept and matted, their clothes part of some private conceit, and the way they talk and songs they sing all become part of some long, mean reach for the jugular.