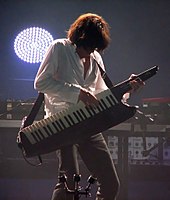 His father Maurice became famous for his film soundtracks such as Dr. Zhivago and Laurence of Arabia, whilst he succeeded in becoming the very first western rock artist to tour the People’s Republic of China in 1981 and selling out five concerts. The audiences in Peking and Shanghai were ultra-polite and did include young students and political leaders.

Jean-Michel Jarre determined to build his own music studio was helped enormously financially by the release of his first synthesiser  record called Zig Zag Dance which sold 300,000 copies. He began also to produce other artists including Francoise Hardy and Patrick Juvet as well as establishing himself as the performer with Oxygene.  Polydor handled the album worldwide due to the tremendous qualities of the music. Although most of the commercial success was due to one section released as a single and titled ‘Oxygene Part 1V. The record split into six parts.

In 1978 Jarre produced Equinoxe, an eight part record through his now new 16 track studio. Over one million people came to see his 1979 concert, events that included audio-visuals, an extravaganza with projectors, lasers and fireworks. ‘Magnetic Fields’ came out in 1981 continuing on with the Jarre electronic style of simple melodies, harmonies and effects. His critics often referred to this saying that he stuck to a simple and safe basic formula with his musical work.

The Chinese tour resulted in an album called the Concerts in China in which he did use three other musicians . It delivered a theme which conjured up the imagery from his ability to mesh the electronic technology alongside the instruments of the Peking Orchestra. The ‘Fishing Junks at Sunset’ a great example. He certainly had a lot of talent in the field of electronic composition.

As at 20014 Jean-Michel had sold more than 80 million records and amongst the instruments used is the Laser Harp. The album of 2006 called Sublime Mix was a special limited edition for the Jaguar Company France. Amongst the many records that he has produced over the years, his latest was in 2017 called Radiophonie Vol 9.

Footnote. If you have a copy of ‘Oxygene’ out on ‘Freyfus’ a french label, then you may have something special. It was mainly promoted through hi-fi stores prior to Polydor. Most fans of his music would have the Polydor version.